By Isabelle BettisSeptember 28, 2022October 3rd, 2022Me, Myself and IARS
No Comments

As a collaboration with UK Youth, we are working on a social action project, EmpowHER, focusing on experiences of street harassment and its impact on people. EmpowHER is a three-and half-year programme (2018-2021) co-designed with young people, which addresses the UK’s alarmingly low level of well-being among young women and girls. Through inclusive and meaningful social action projects, the programme supports young people by assisting them in giving back to their local communities.

SCULPT is launching a magazine in November, and we wish to dedicate the first edition to EmpowHER and the movement protesting sexual harassment. In order to understand people’s thoughts on the topic, we spent a few hours at the Camden Lock entrance, carrying signs to trigger people’s attention. These read as “speak out against Sexual Harassment” and “Tick if you’re Tired of Street Harassment”. We collected around 250 ‘Ticks’, showing a consensus of women tired of unwanted sexual advances. Some people even thanked us for what we were doing and wished us the best for the future of our mission. It was sincerely great to observe the general support from passers-by.

Moreover, we interviewed 24 persons about their opinions on the topic and recorded them with consent. We had the chance to stop a range of people, including men, and women, between 16 to probably 60 years old. As Camden is quite a touristic place, we were also grateful to interview various people from different countries around the world, all sharing the general intolerant attitude toward harassment.

While asking their thoughts on the topic, most people answered being sincerely concerned about street harassment. They agreed that we should be more aware of the cause and more educated in respecting others, especially women. They also showed a great interest in speaking about it. Somebody said: “The more we push people to talk about it, the better the next generation will be aware of it”.

We were also interested in understanding the relationship between street harassment and how people dress daily. It appears that many women do not always feel comfortable wearing what they would like and have experienced verbal harassment when wearing a short skirt, low-cut neckline, or even when dressing unconventionally. However, most of the passers-by agreed on the fact that we should all be free to dress the way we wish. They also mentioned that England was quite a free country while dressing up, compared to other places such as the middle east or north European countries.

While most people’s feedback was positive, we also experienced individuals not respecting our signs or thinking against the cause. For example, a teenager crossed out the poster and explained later that he did it because of a bet his friends gave him. A woman also mentioned being never harassed before and wishing to be one day. Fortunately, it was only a minimum number of people among the total interacted with, however until 100% of people understand the dangerous repercussions of sexual harassment there will always be people at risk. 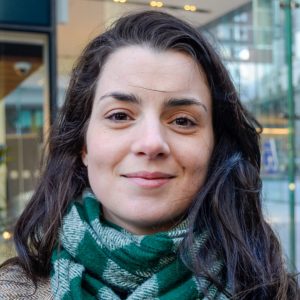