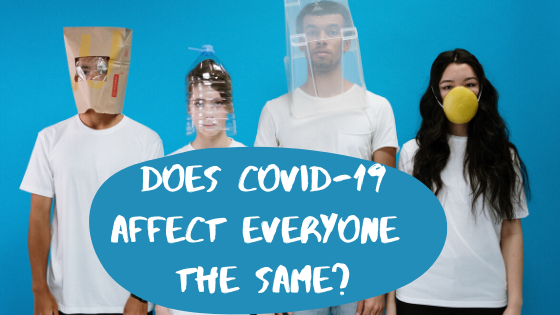 Does COVID-19 affect everyone the same?

IARS mission is to empower young people  to speak out on issues they care about. We support the  99% Campaign, a youth-led initiative and digital participation programme aiming to make society more inclusive, fair and responsive to young people’s views and realities. It achieves its mission by giving direct voice to the most marginalised young people and by dispelling negative stereotypes.

In this edition we would like to highlight one of the articles written by Anastasia Vaitsopoulou about the impact of COVID on the most vulnerable members of society. Although IARS doesn’t necessarily endorse all views expressed by the young contributors of the 99% we felt this article covers on many worries specifically related to young people such as the vulnerabilities of the gig economy, the specially challenges for the BAME Community and the potential surveillance state, among others.

Apart from a public health crisis, the novel coronavirus outbreak brings into the spotlight the inequalities and social crisis we have been undergoing for years.

Who would have thought that in the first months of 2020 the whole planet would be facing the completely unprecedented situation of self-isolating and national lockdown? The coronavirus outbreak, described by the World Health Organization as a pandemic, is probably the greatest crisis of our generation.

Health workers are giving their best on the frontline in this global fight. Scientists are making every effort to discover an effective vaccine. Governments struggle to disguise their impotence, by taking ostensibly appropriate measures, and giving pieces of essential practical advice to the public, while simultaneously trying not to create panic; which the mainstream media manifestly manage to inflate quite substantially. Schools, universities, businesses and public spaces are being shut down and the general public is quarantined, in very stressful circumstances, since the biggest part of the population is compelled to continue working from home, or worse, not working at all.

What COVID-19 has managed to do is underline the omnipresent inequalities in our communities, as citizens do not have the same resources to cope with it, nor could they all have diagnosed and treated their underlying health conditions properly. As in every crisis, certain groups of people struggle more than others.

Novel coronavirus is not only a public health threat, but a social and financial crisis. The most vulnerable groups of our communities are going to suffer the most because of the pandemic. How are all the precarious workers, young people in the gig economy, unsecured immigrants, and asylum seekers going to withstand the consequences and economic hardship? The question posed to governments around the world is how people are going to continue paying their rents, afford living and financially survive. Specific measures have been suggested, like a moratorium on rent, subsidizing people’s incomes (already put into effect in Denmark and Sweden) or implementing a Universal Basic Income, so that we make sure that every member of our society is getting by decently.

One of the interviewees said “We are currently losing key staff members and because of this, other workers have to take on extra work loads in order to provide support to the young people who need it the most at the moment. Some of our staff are being furloughed and we are going to have to take on extra workloads and some young people may not receive the right support they need.” Youth organisations are facing an unprecedented impact to their largest streams of funding. Even previously sustainable organisations, such as social enterprises with diversified sources of income, are affected.

Other matters of their concerns include the wellbeing and mental health of young people, the disadvantaged youth becoming more disengaged from support, as well as their physical safety and their access to appropriate devices or sufficient internet connection in order to take advantage of the digital support and activities.

“The negative impact of COVID-19 on our stakeholders and users from having to stay indoors and self-isolate is a major concern on people’s health, well-being and mental state of mind. Many of our families  live in social housing and cramped accommodation with small apartments but sharing and living with numerous family members. This will cause an unbelievable amount of stress and pressure within a household”, one of the London Youth’s members commented.

Since the first and most important advice for everyone is to stay at home and self-isolate, women’s rights organisations urge the governments to take immediate action, for there is an impressive rise of domestic violence cases; national helplines around the world have noted a record number in their incoming calls. In some parts of China, the number of domestic violence cases has been three times higher since the pandemic started and a support service in Oregon, US, has received a double number of calls, whereas support services in Australia are concerned, because the 2019/20 fires had already caused a surge in domestic violence cases. Women and children face greater danger and not because of the virus itself, but due to the fact that they have to remain at home all day with their potential abusers.

The fact that COVID-19 started in China was a good enough excuse for racist comments both from politicians and the public to take over the public sphere, leading to #CoronaRacism. It is one thing to criticize a government for its dangerous practices and a whole different thing to discriminate or attack against certain groups of people, as a few hate crimes have occurred within the UK during the last couple of months. Circumstances that show many similarities to the ways that the HIV epidemic impacted the Black/African and the gay community and how 9/11 impacted Muslims and Arabs around the globe.

Even before the pandemic, ethnic minorities had to deal with racism and now, analysis shows that racial inequality is a risk factor for the disease too. New research from the Institute for Fiscal Studies and the LSE shows that there is a higher COVID-19 death rate for ethnic minorities. For instance, it is three times more probable that a Black Caribbean rather than a White British dies in hospital in England.

The first 11 doctors who lost their lives to COVID-19 were all from BAME (minor ethnic) communities and areas with high ethnic minority populations in England and Wales tend to have higher mortality rates. Likewise, 63% of health workers fatalities, up to April 22, 2020, were in BAME people, according to a Health Service Journal analysis.

Similar patterns have emerged in various European countries and the US, but as Prof Khunti told the Financial Times, no other nation had as strong evidence as the UK about overall ethnic patterns of coronavirus; “We in the UK are in a position to alert the world to what is happening.” The risks of the virus to minority groups could not be any clearer.

Our mental health is also at risk. Social distancing and confinement raise our stress levels, which along with depression and anxiety are detrimental to our immune systems. Insecure work and poor diet are the main protagonists in this equation, which irrefutably has strong links to poverty.

What is more, as WHO’s Director-General Tedros Adhanom Ghebreyesus declared, “We’re not just fighting an epidemic; we’re fighting an infodemic.” Media in times of crisis can either fan the flames, or be the antidote to hate and fake news.

The human rights dimensions of the outbreak do not stop there. ‘If we are not careful, the epidemic might nevertheless mark an important watershed in the history of surveillance’ stated Yuval Noah Harari, the renowned Israeli journalist, drawing our attention to the ongoing battle for our privacy, and the fact that sometimes extreme measures, taken during a crisis, tend to outlive it. Given the technological advances, present-day governments can monitor every single citizen 24 hours a day. Several countries have deployed new surveillance tools, which allow them to manipulate the population or punish the ‘misbehaved’.

Nonetheless, panic has settled down and solidarity is now thriving. Countless people are self-organizing in order to help their neighbours with their groceries via online groups and chats, some of them sing and play music from their balconies, with Italians giving the first ‘quarantine concerts’ and some others share their knowledge for free through webinars. Artists all over the world play live from their living rooms for the whole world to enjoy and graffiti, like the one below that says “Mom, it will pass”, give us strength and hope for the future.

It is worth mentioning that because humankind has been confined, the earth is now healing. The emissions and health-damaging air pollution have dropped dramatically. In China, the number of “good quality air days” increased by 21.5% in February, compared to last February. The trademark canals in Venice are another evidence of the decreased pollution.

In these uncertain and challenging times, it is crucial that people stand up for each other and that all citizens remain healthy, both physically and mentally, as well as politically empowered.

An economy and society built on insecurity and exploitation has been once again exposed, but crisis moments also present opportunity. We may come to see this period as a chance to reflect on how to make things better. After we ensure that the human rights violations and the losses to our communities are kept to a minimum, the emphasis must lie on how we can change the status quo, if we want a fairer and a radically equal society.