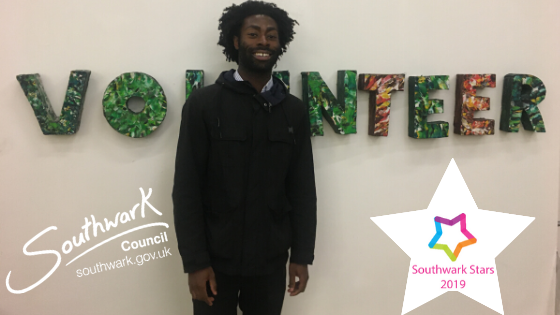 We have had the pleasure of working with James Myers-Antiaye for almost a year and his unparalleled commitment has moved us to nominate him for the Southwark Stars Awards.

He attended the ceremony on Friday 8th November held at the Tate Exchange, which was a great venue for this joyous occasion that celebrated a wide range of volunteers and charities working in Southwark. The ceremony recognized volunteers who have given a minimum of 100 hours in Southwark over the last year.

The ‘Older Volunteer of the Year’ winner- Bernie Bristoll gave the audience a fantastic insight into the work he does at the Imperial Wharf Museum and impressed everyone by demonstrating his ability to speak in Morse code.

‘’ It was great to see the work fellow volunteers had been doing and the impact they were having on their prospective organisations and the borough as a whole.  It was an inspiring evening as it gave me a stronger understanding of the great charity work being carried out in Southwark while inspiring me to become more involved in the community’’. James