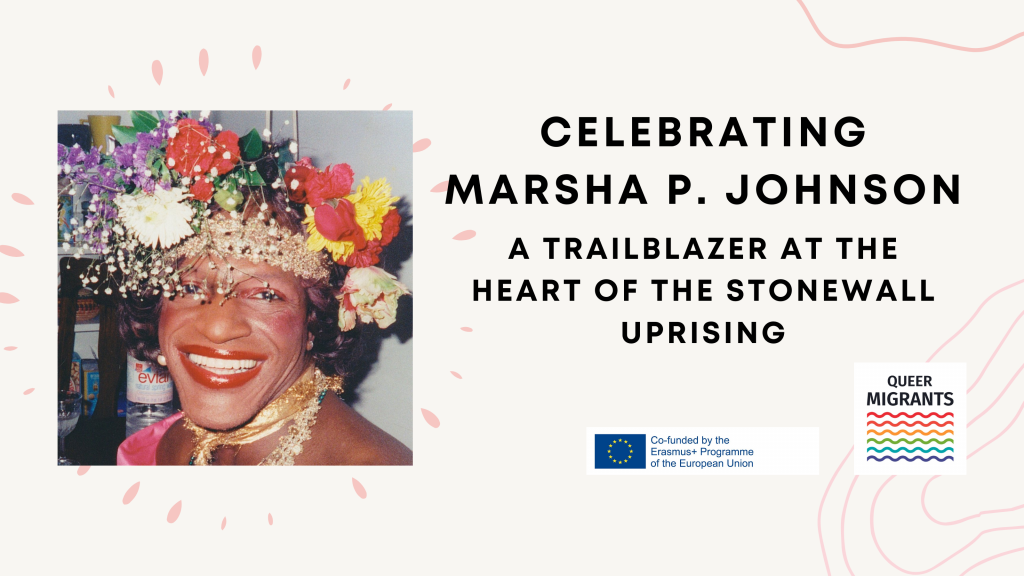 Celebrating Marsha P. Johnson: A Trailblazer at the Heart of the Stonewall Uprising

Speaking to an interviewer in 1972, Marsha said that her dream was “to see gay people liberated and free and to have equal rights that other people have in America,” tragically she died in 1992, long before same-sex marriage and gender change were legally recognised in the US. Although her ambition has yet to be fully realised in 2021, it is undoubtable that Marsha’s passionate advocacy for LGBTQ+ rights has had a deep and profound impact on the LGBTQ+ community, powerfully shaping the modern LGBTQ+ community we recognise today.

Marsha P. Johnson was one of six siblings, born in New Jersey to a housekeeper and General Motors worker in 1945. From a young age, she felt an affinity for feminine clothing and would wear dresses which encouraged boys in her neighbourhood to bully her, leading to Marsha suppressing her identity throughout her childhood. It wasn’t until she moved to New York City at the age of 17 with only $15 and a bag of clothes that Marsha was able to truly explore her self-expression as a drag queen. The diverse and welcoming gay community she encountered in the city inspired her to come out. Eventually, she would legally change her name to “Marsha P. Johnson” with the ‘P’ standing for “pay it no mind” – a phrase Marsha used when people asked about her gender.

During this time, being gay was considered a mental illness in the US with LGBTQ+ people ostracised by society and regularly abused or threatened by the police. This of course, resulted in a life of hardship for Marsha who was living on the streets of New York without a home or financial arrangements.

In June 1969 when Marsha was only 23 years old, the police carried out a violent raid on a gay bar in New York named ‘The Stonewall Inn’ where the police used excessive force against the patrons, driving 200 of them onto the streets and beating them.

In retaliation of the police raids, Marsha alongside Stonewall patrons and others who frequented gay and lesbian bars in the Village, led a series of protests spanning over a few days. The marches demonstrated powerful resistance and solidarity within the LGBTQ+ community and additional engendered an unprecedented wave of public support for gay rights. The Stonewall Riots are now widely regarded as the pivotal catalyst of the gay liberation movement and a historic milestone in the fight for LGBTQ+ rights in the US.

The year following the Stonewall Riots saw a Christopher Street Liberation Pride rally that Marsha took part in as a member of the Gay Liberation Front, which would set the precedent for the annual commemoration of Pride Month.

With her friend and fellow transgender rights activist, Sylvia Rivera, Johnson founded STAR (Street Transvestite Action Revolutionaries) in 1972 which sought to provide a safe space for gay and transgender homeless young people. STAR’s primary mission was to care for gay youths that found themselves lacking acceptance and security elsewhere and to make sure they did not face violence on the streets from intolerant people. Marsha acted as a ‘Queen Mother’ at STAR referring to anyone brought off the street into the STAR homes as “children,” fostering a sense of kinship especially amongst the African American and Latino LGBTQIA+ community – many of whom faced rejection from their families.

By the 1980s Marsha was a tireless AIDS activist, who became an organiser and marshal at the AIDS Coalition to Unleash Power (ACT UP). Indeed, she had dedicated much of her life towards the fight for gay liberation.

Marsha P. Johnson’s story continues to resonate with the LGBTQ+ community because of the passion, hope and perseverance she demonstrated in the face of adversity- which makes her an icon with an impressive legacy that continues to inspire.