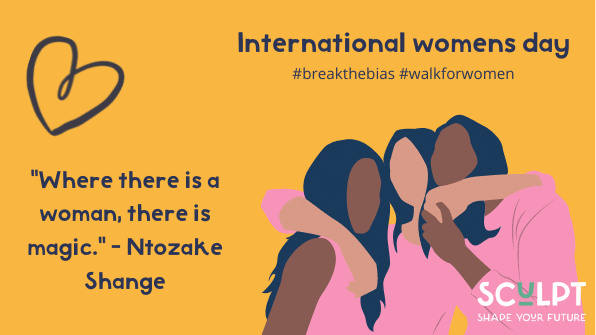 Why is the walk for women important?

We (3 work experience students) walked around central London on March 8th, visiting sculptures and historical sites of women who have had a significant impact on women’s liberation or independence. Waterloo Bridge – also called ‘The Ladies Bridge’, Mary Seacole’s (1805-1881) statue, Millicent Garrett Fawcett’s (1847-1929) statue in Parliament Square, Emma Cons (1838-1912) Gardens, Red Cross Garden – Octavia Hill (1838-1912) and the Crossbones Graveyard were among the sites we visited with the help of the Sculpt team.

The walk was organised by The Bridge, a charity that has organised a number of different projects and campaigns about community and health. This walk was a great way to show support and a number of people showed up to support the cause.

What and when is International Women’s day?

During the early 1900s, the women’s rights movement in industrialising countries introduced the world to International Women’s Day.

In 1909, the Socialist Party of America announced National Women’s Day for the first time. The idea of an International Women’s Day was proposed and approved at the second International Conference of Working Women, a gathering of women from activist and political organisations in Copenhagen, in 1910. Until 1913, it was celebrated on the last Sunday of February.1

Many other countries countries also celebrate International women’s day. In 1949, March 8 was declared an official holiday and International Women’s Day officially arrived in China. Mao Zedong famously said, “Women hold up half the sky.” This viewpoint, along with new legislation implemented in the People’s Republic of China that gave women more power over their marriages and financial destinies, helped to debunk the notion that men and boys were more important. Women were able to gain privileges that they had never had before, such as more independence, the opportunity to attend school, marry and divorce, and run for public office.

How do we celebrate International Women’s Day?

International Women’s Day is celebrated in a number of ways. Participation in a variety of digital and in-person social events, such as festivals, art exhibitions, and award ceremonies, among others, organised by a variety of governmental, non-governmental, and corporate institutions, can count as commemoration. A women’s suffrage march was held in London on March 8, 1914, advocating for women’s right to vote, and high-profile campaigner Sylvia Pankhurst was detained.

International Women’s Day is celebrated as a national holiday in many countries, with women receiving flowers and gifts, and IWD activities taking place in major cities throughout the world. This portal was developed in 2001 to reignite interest in the day, honour women’s accomplishments, and continue to advocate for gender equality.

In honour of the anniversary, US President Barack Obama declared March to be Women’s History Month. He stated that “History shows that when women and girls have access to opportunity, societies are more just, economies are more likely to prosper, and governments are more likely to serve the needs of all their people.”

#BreakTheBias is this year’s theme, and it invites the world to speak out about instances of gender bias in the workplace, at school, and at home. People are encouraged to show their support for this year’s theme by sharing selfies with their arms crossed on social media with the hashtags #BreaktheBias and #IWD2022. Selfies can also be uploaded to the website for International Women’s Day.

What colour do you wear on International Women’s Day 2022?

What is the gender pay gap?

With only 58% of the gap reduced, the gender gap in Economic Participation and Opportunity remained the second largest of the gaps measuring inequality. Women were directly impacted by the pandemic, in part because they are more likely to work in the toughest industries, such as retail. According to the Fawcett Society, which fights for equal pay in the UK, the gender pay gap is the “difference between the average pay of men and women within a certain group or demographic.”3

Every year, the charity commemorates Equal Pay Day in the United Kingdom, the day in the year when the average median woman’s earnings begin to equal those earned by the average median man in the previous year. The date differs year by year, falling on November 18 in 2021.

Rosa Parks was an American civil rights activist who refused to give up her bus seat, sparking the Montgomery bus boycott in Alabama in 1955–56, which prompted the civil rights movement in the United States.

Malala Yousafzai, a Pakistani activist, was born on July 12, 1997, in Mingora, Swat Valley, Pakistan. As a teen, she has spoken out openly against the Tehreek – e Pakistan’s ban on girls’ education.

Maya Angelou was a writer, memoirist, and civil rights activist from the U.S. She is the author of seven autobiographies, three volumes of essays, and six volumes of poetry, as well as a growing list of plays, films, and television series spanning more than 50 years. She was recognized with hundreds of honours and over 50 honorary degrees.

Sojourner Truth was an abolitionist and women’s suffrage campaigner from the United States. Truth was born a slave in Swartekill, New York, but fled to freedom in 1826 with her baby daughter. She became the first black woman to win a lawsuit against a white man after having to go to court to regain her son in 1828.